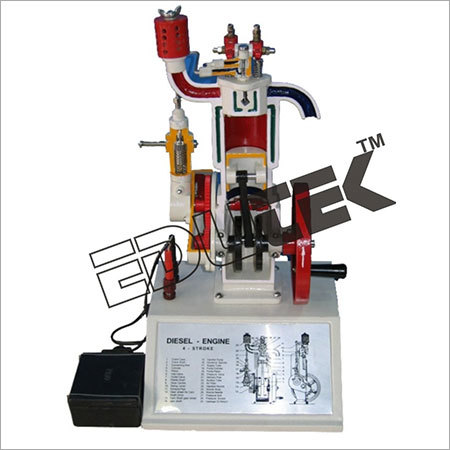 A model of four stroke water -cooled diesel engine. This is of the chain-driven overhead camshaft type and all functional components like camshaft, rock-arms, tappets etc. are clearly demonstrated. The functioning of fuel injection system is also represented. Ignition is shown by means of a miniature bulb, Mounted on base.

The Diesel Engine block models a diesel-fuel, compression-ignition engine with a speed governor. The engine runs at a variable speed that you can control with a Simulink throttle signal. The throttle signal directly controls the output torque that the engine generates and indirectly controls the speed at which the engine runs. If the engine speed exceeds the maximum speed that you specify, the engine generates no torque. The model does not include the air-fuel dynamics of combustion.

The block accepts the throttle signal through a Simulink inport. This signal specifies the engine torque as a fraction of the maximum torque possible in a steady state at a fixed engine speed and should lie between 0 and 1. A throttle signal below zero is interpreted as zero; above one, as one.